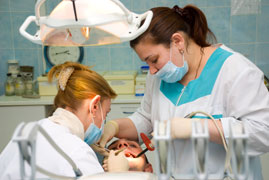 Because employment cases are settled on a confidential basis, the names of the clients who have written the following testimonials for Cornish & Dell’Olio, P.C. have been changed.

“I am a high school teacher who was wrongfully terminated from my position based on my National Origin. I hired Cornish & Dell’Olio to bring a lawsuit against my former employer, a private school. Donna Dell’Olio represented me. I was very pleased with her abilities and professional demeanor throughout the entire process. The atmosphere in her office is welcoming and her staff is friendly and helpful.

Because the school and its insurance company did not want to settle my case Cornish and Dell’Olio filed a lawsuit on my behalf in federal district court. Many motions and briefs were litigated in my case.

The quality of work performed by Cornish and Dell’Olio was very high. In fact, we won numerous hearings.

When my case settled, the insurance company for the school paid more than I had offered to settle the case for in the first place.

Her excellent representation allowed us to reach a settlement.

I highly recommend Donna Dell’Olio and Cornish & Dell’Olio as a law firm with superior skills. Donna Dell’Olio is a lawyer with a lot of valuable experience and is extremely knowledgeable. It was a pleasure to know her.”

“In 2012 I was unfairly terminated from my position as an accounting assistant for a large nonprofit organization. I was the victim of illegal discrimination. Based on the recommendation of a professional, whom I respect, I called Cornish & Dell’Olio.

I paid for an initial consultation with Donna Dell’Olio and she listened to my story. She made no promises but took my case. Three months later she obtained a settlement for me of $50,000.00, which helped me move on with my life. She explained everything to me clearly and had a very decisive strategy and executed it to obtain my settlement. I felt that she was 100% on my side.”

“I worked as a Security Officer for a large, national security company.  After I took FMLA leave and provided a certification from my physician stating that I was medically cleared to return to work my employer failed to return me to an equivalent position and required that I disclose all prescription medications before allowing me to return to work.  I spoke with Cornish & Dell’Olio to determine if my employer had violated my legal rights.  After my consultation I hired Brad Sherman to represent me.  Mr. Sherman identified violations of both the Family and Medical Leave Act as well as the Americans with Disabilities Act.  After a brief period of negotiation I was able to settle my claims.

I was very pleased with the outcome. Brad Sherman was very efficient and professional with my case.”

“I worked as a Sales Supervisor for a retail chain with a location in Colorado Springs.  After I was denied a promotion because of my age despite repeated promises from the Store Manager that I would be given the position I hired Cornish & Dell’Olio to represent me at arbitration.  Brad Sherman represented me through the entire course of my arbitration.  After several months of arbitration I received a settlement in my case and was able to move on with a new career.

“After fifteen years of employment as an Executive Director for a large senior living facility, my employment was terminated without warning, and my employer failed to pay me all the wages I was owed.  Other lawyers that I know and trust referred me to Ian Kalmanowitz as a lawyer with the knowledge and experience to help me.  I met with Ian Kalmanowitz and he was very sympathetic to my situation, and offered to try to help me obtain my unpaid wages and try to negotiate a severance package for me.  Less than ten days after I hired Ian Kalmanowitz, he informed me that the company would pay my unpaid wages, and a few weeks later, he was able to negotiate a favorable severance package for me.  I was very impressed with how quickly Ian Kalmanowitz was able to resolve my situation, and I felt that he worked hard and for my best interests.  I would not hesitate to recommend Ian Kalmanowitz or Cornish & Dell’Olio, P.C. to anyone who feels they have not been treated fairly by their employer.”

“In 2012 I worked for a company that expected you to work through your lunch break as well as come to work early and stay late, but they did not want to pay any overtime.  Employees were made to feel that their job would be in jeopardy if they did not work the additional time.  Fortunately I documented all the hours I worked.  After working there nine months, I objected to working without pay.  As a result I was terminated.

Donna Dell’Olio and Cornish & Dell’Olio came highly recommended to me from a trusted friend.  I met with Donna and she listened to my case and agreed to take it.  As a result 2 other prior employees that I worked with also joined our case.  After only 4 months we settled our case resulting in the company paying our back wages and my wrongful termination totaling $65,000.

Donna Dell’Olio was very professional and did an excellent job representing us.  I felt she always guided us in the right direction and was definitely there for us.  I would highly recommend Donna Dell’Olio and Cornish & Dell’Olio to anyone.”

“I have been a State employee for over 16 years.  In mid-2012 the agency I worked for was restructured, and my position was transferred to a different department.  After the restructuring, and completing all the tasks required of me for transfer, I was informed that I would not be permitted to transfer, because I was not eligible to work for the new department.  I was in a position of either having to move to another part of Colorado to continue working for the State, or having to find another job with a different employer.  I did not think it was fair that as a classified employee I could be denied a transfer without an explanation, and I hired Ian Kalmanowitz to represent me.  Ian Kalmanowitz agreed that the State was violating my rights, and he filed a case for me with the State Personnel Board claiming that the State’s refusal to transfer me violated my Constitutional rights, State law, and the State Personnel Board Rules.  After that action was brought, the State agreed to transfer me into a position in the new department.  Thanks to Ian Kalmanowitz’s hard work, and his knowledge of this complex area of the law, I am still employed by the State, and very happy in my job.  I would highly recommend Ian Kalmanowitz to anyone who needs help with an employment issue.”

“A friend told me about Donna and how good she was after I had been fired without warning. Having never been disciplined in my entire career for anything and having just confronted administration on potential violations of federal laws within the department I new I had been retaliated against and wrongfully terminated.
After completing the consultation, Donna told me exactly what she thought and how we could proceed if I wanted to. My case proceeded and Donna took on a viciously snowballing case that without Donna’s experience and expertise to control could not have ended as great as it did. Donna’s brain works like a well-tuned legal Rolodex, always ready for anything that may come from any direction. I can’t say enough good things about the work she did and how well she kept me informed on what was happening.
In only 10 months Donna was able to get me a great settlement with enormous amount of money that will easily protect the future for my family.

I recommend Donna to anyone looking for the best.”